The first race of the year and an overall victory for Christian Merli. The leader of Team Blue City Motorsport dominated the entire weekend, that is to say the practice and race runs of the 27th edition of the Salita del Costo in northeastern Italy. At the wheel of his Osella FA 30 he beat Simone Faggioli, who was racing the new Norma M20 FC. 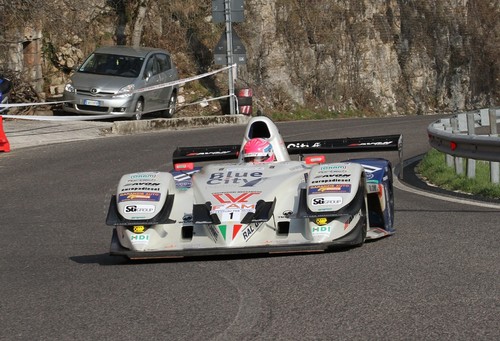 Christian: a promising start to the season
“I am happy, considering that we finished assembling our FA 30 only this weekend and then rushed to the starting line. Everything went well. We tried out a few things in the practice and race runs. We’re well satisfied with the collaboration with LRM, owned by the Petriglieri brothers, who take care of our engine. What adds to this success of Team Blue City Motorsport is the results of Sante Ostuni and Lutz Spitaler, who race our two Osella PA 21 Jrb 1000. The next race? For the moment, we have entered for the first round of the European Hill Climb Championship next Sunday at Col Saint Pierre in France. Then we will decide what to do next, one race at a time.”

The Salita del Costo
It is the first hill climb race of the season, counting for the northern Italy hill climb trophy, and all the high-profile drivers are here to test the changes made to their cars before going on to tackle the European or Italian championships. A single race heat, 9.910 km long, with ten hairpins, which goes from Cogollo del Cengio to Bramonte in the province of Vicenza.

Practice
In the first official practice session on Saturday morning Christian Merli in his Osella FA 30 posts the best time, beating Faggioli, who is racing with the new Norma M20 FC, by 3”10. The second practice run takes place in the afternoon, with the Team Blue City Motorsport leader again at the top of the order. Faggioli, kept on his toes by the many changes to be made, finishes fifth.

The race
Christian Merli in his FA 30 wins the single race heat. Faggioli is second, only 0”21 behind the Scuderia Vimotorsport driver from Trentino.