Christian Merli, Team Blue City Motorsport leader, clearly dominates Race 1 of the 44th Alpe del Nevegal in northeastern Italy, the opener of the Italian hill climb championship CIVM.
In Race 2 everything is turned upside down by the rain. 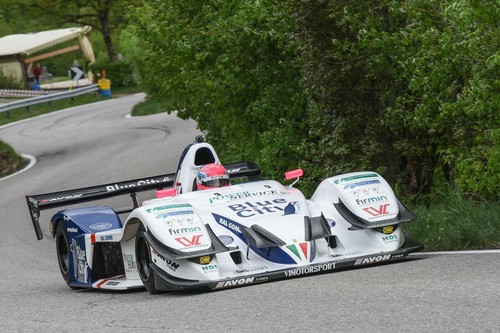 Merli describes the turn of events
“We were on the start line queue for the second run when there were two drops of rain. The clerk of the course immediately declared the race wet, although I didn’t think it was. Perhaps he was a bit too much concerned for our safety. He allowed the tyres to be changed from slicks to wets. Since it wasn’t raining I didn’t even move. Then the race was restarted, and the first two drivers who went up on slicks posted times similar to those in the first run. So my intuition had been right. Unfortunately a driver who was starting ahead of us then had an issue and the race was stopped. We lost about twenty minutes overall, and there had been only seven drivers left to take the start. After all this time lost there then promptly came the downpour which had been forecast.” 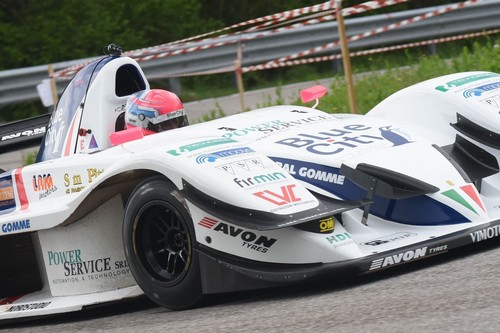 Christian’s win in Race 1
“I am very happy. We also managed to set a new track record. Now we bag the points for Race 1 and get ready to leave for Portugal, where the third round of the European championship is held next Sunday.”

Practice
In the first practice session, in the rain, Team Blue City Motorsport leader Christian Merli opts for slicks to test the start for the race and finishes second, 0”82 behind the leader, with Magliona in third place, 1”15 behind. Dry conditions for the second practice run in the afternoon. Merli is at the top of the order in 2’28”30, which is below the record of the track.

Race 1
Christian dominates in 2’26”84, the new track record. Cubeda is second, 2”09 behind, while Magliona in the Norma M20 FC takes bronze.

Race 2
Everything goes well until just before the start of the last seven single-seaters. The clerk of the course stops the race. The win goes to Magliona.