Christian Merli clearly dominates the training and the first race heat and even breaks the track record this weekend at the 47th Subida al Fito in Spain, the 4th round of the European Hill Climb Championship. In the second race heat the Team Blue City Motorsport leader is forced to retire because the rear right-hand drive shaft on his Osella FA 30 has broken.

Christian’s bitter comment
“A stupid failure. The drive shafts are normally replaced at fixed intervals, and we were well within those maintenance requirements. Of course these things happen, but we’re left with a bitter taste. Everything was going perfectly for the entire weekend until the very last run. We were dominating the training and the race and had set a new track record. Now we’re going home with zero points, and this will be the race which we drop in the first half season. In the next two rounds we are allowed no more mistakes. The will to win remains unchanged. That’s what races are like, but after a glorious weekend this failure is difficult to digest.” 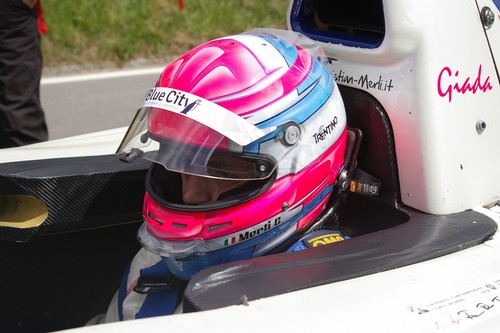 Official practice
The weekend in Asturias begins with the official practice on Saturday. There are four training heats and two race heats on the 5.350 km track. The Trentino champion, who races for Scuderia Vimotorsport, is 3”304 ahead of Norma M20 FC driver Simone Faggioli in the first run and 7”123 in the second. In the third practice session, Merli finishes in 2’27”202, below the track record. His direct contender is 4”333 behind.
In the fourth practice run on Sunday morning, it is again Christian Merli who tops the timesheet.