At the 48th Subida al Fito Christian Merli brings home his fourth overall victory in four European Hill Climb Championship rounds. After securing the top spot in France, Austria and Portugal in his Osella FA 30 Zytek LRM, he now wins in Spain, in demanding weather conditions. It is a closely fought battle with the multiple European champion Simone Faggioli behind the wheel of the Norma M20 FC.

Christian’s comments
“I’m very happy. During practice, in the rain, we found the right setup with the rain tyres. In the first race heat on Sunday we tried with the intermediate tyres, but in the wooded section, where the track was still damp, it didn’t feel the same. The second race heat, again on intermediates, was fantastic, and conditions were optimal. Then in the final race heat I could have moved to slicks but we decided to remain cautious. There were rivulets of water going across the track, and it would have meant jeopardising the result. It was fine. As per the regulations we dropped the slowest run, the first race heat, and for the fourth time in four races we claimed the top step of the podium. I would like to thank all those who work together on getting the car just right. Now we’re going home and in two weeks we’ll be starting at Ecce Homo in the Czech Republic.”

Race heat 1
On the damp track Merli opts for intermediate tyres. Faggioli finishes first, with Christian 2”895 behind. The participants in the European championship contest three climbs, with the slowest run getting discarded. 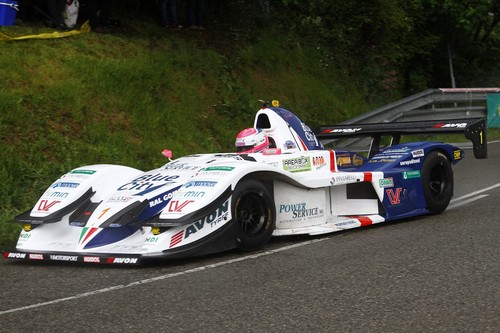 Race heat 2
This time, Christian is first with Faggioli 2”126 behind.

Race heat 3
The third heat follows immediately, with Faggioli edging Christian by 1”408. Based on the total of the two best heats, Christian Merli takes the overall victory.