The first hill climb race in 2020 and the first victory for Christian Merli behind the wheel of his Osella FA 30 Zytek LRM. The 14th Nagrada Grada Skradina, part of the Croatian championship, took place between the Croatian cities of Zara and Spalato, about 400 km from Trieste. It was Christian Merli’s first time on this track with his Osella FA 30 Zytek LRM. 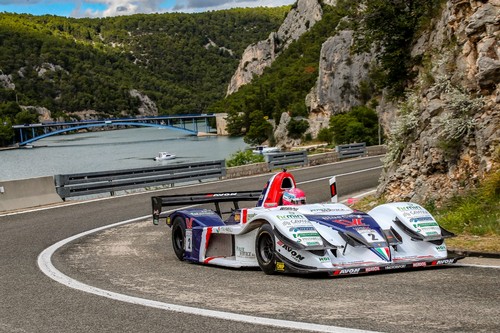 Christian’s comments
“It was great. Mind you, we left out the first practice run because of the rain, and in the second run the track was wet. Only the last run was dry. Not a lot to go on in trying to find the right setup for the new rear of the car. This morning in the first race heat our Osella was skidding a lot. Nevertheless we set the best time, and before the second race heat we made some changes to the transmission. The first part then went very well, but I lost a bit at the end. However, it’s the first race of the season and the first victory. I’m happy, and I dedicate this victory with all my heart to my friend Rolando. Also, my very best wishes to Alex Zanardi.”

Practice
Saturday sees the practice heats on the 3.385 km track. The top pilots give the first run a miss because it is raining. In the second run, on a wet track, Merli finishes first in 1’35”908, with Faggioli 4”545 behind. In the third session, the only one in the dry, the drivers step on the accelerator and push the times down by around 10 seconds. Faggioli is first, with Merli only 0”075 behind.

The race
The first race heat takes place in the dry, dominated by Merli in 1’22”989 and at an average speed of 143.151 km/h. Faggioli in his Norma is 0”989 behind. The second race heat starts at 3pm. Faggioli finishes in 1’22”257. Christian is second, 0”608 behind, so he wins the Croatian race on accumulated times and climbs on the top step of the podium.