After his victory and record at Osnabrück in Germany behind the wheel of his Osella FA 30 Zytek LRM, Team Blue City Motorsport leader Christian Merli is travelling to northern Switzerland for the 10th of the twelve rounds of the European Hill Climb Championship: the 76th Course de Côte de Saint-Ursanne, west of Basel and close to the French border, on Sunday.
The Osella works driver has won in France, Austria, Portugal, Spain and the Czech Republic so far. He was seventh at the Trento–Bondone after his engine had suddenly switched off and on again in the final section of the track. In Slovakia and Poland he then finished second. He has always won his Group E2-SS, the single-seaters, and is topping the overall standings with 200 points together with Simone Faggioli, who is dominating among the two-seater sports cars.

Christian’s goal
“It will be very important to take home maximum points in my Group E2-SS. Of course, you always want to aim for the overall win. It’s a fast race, very demanding, where no errors are allowed. Starting in the middle of the little town, there is immediately a very challenging double bend. Then it gets flatter and there are a couple of straights where you reach 250 km/h. Next a left-hand bend to be taken almost at full throttle underneath the motorway viaduct, leading to a large natural amphitheatre crowded with spectators. Quite a challenging mixed section in the forest, and about one kilometre before the finish line a tricky left-hand bend which tightens up, followed by a right-hand hairpin, a straight stretch of about 100 m, and a left-hand hairpin. Finally another right-hand hairpin before you cross the finish line. The track is 5.180 km long and has a gradient of 10%. Three practice heats and two race heats.” 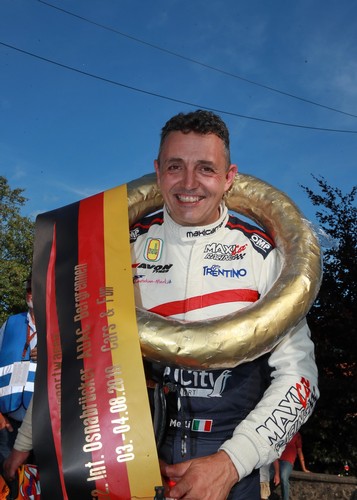