This weekend Christian Merli will be racing at the 21st edition of the Prealpi Master Show. Held at Sernaglia della Battaglia in Treviso province in northeastern Italy, the second round of the Challenge Rally Terra starts with the 6.300 km “Trofeo Casagrande” special stage at 3.50pm on Saturday. Three timed rounds on the 9.180 km “Master Show” track will follow on Sunday. The European hill climb champion will be teaming up in the Skoda Fabia R5 with co-driver Marco Zortea. 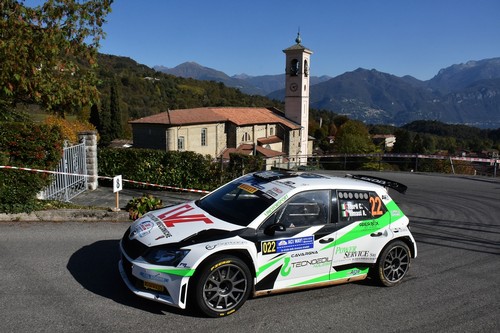 Christian’s comments
“This opportunity came up and we embraced it immediately. A fun event with a team from Trentino. We’ve raced here before, but this will be the first time on Cooper tyres, which I don’t know at all. The race will be a test. We want to enjoy ourselves, but when the light turns green you always give your all. A great way to end the year, and it will be pretty tough, since there will be more than 40 R5s present. The surface is hard, let’s hope that it won’t rain, and the special stages are so short that you can’t afford any mistakes. Every little error will cost you seconds which you take with you to the finish line.”

An unforgettable evening
“We got to play a prominent role, both Faggioli and I as drivers and the Trento–Bondone as the event of the year. First we were called to the stage to receive the ACI award from President Angelo Sticchi Damiani and then again for the Casco d’Oro handed over by Autosprint Editor Andrea Cordovani. Our ex aequo victory in the European championship has made the headlines, and it was an honour to be there. There was another driver from Trentino who received a prize, the winner of the Italian GT4 championship, Giuseppe Ghezzi. I think it was the first time that there were two Trentino protagonists. Now I’ve got both this year’s and last year’s Casco d’Oro at home. I’m very happy, and we got a big round of applause, not least from Formula 1 world champion and 500 miles of Indianapolis winner Jacques Villeneuve and René Arnoux, protagonist of the famous and spectacular duel with Gilles at Digione in 1979. Other top players included Italian rally champions Basso and Granai and all the protagonists and winners from the various motorsport disciplines. All major press and TV outlets were there too. A really great experience”.